I have been looking after a five year old who tells me that she "loves scrapbooking and crafting Grandma". I give her a piece of paper - she prefers the white pages from the albums - and some scraps and a photograph or two. She sits at the table happily cutting the scraps into even smaller pieces then she spreads glue on the page and sticks the pieces onto it. She places the photograph where there is a space (and when she suddenly remembers it is there) and all the time she works she talks.
I quietly do my own thing while occasionally saying "uh huh, really, goodness me" and other words of few syllables. I have never been to a crop but I suspect that this is very similar.
My only complaint is that I am the one that swabs down the table after she has gone home. I meant to photograph her page today but she was gone before I remembered and she gives them all to Mummy for her scrap album. You will just have to make do with some of mine 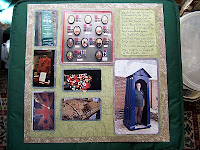 We went out for the day with my Cousin and his wife - the other Colin and Ann - and we went to the South Wales Borderers' Museum in Brecon. I wanted to see the VCs won by men of the 24 regiment of Foot at Rorke's Drift. Mr M didn't come in as he fails to see the fascination with all these old wars. He stayed outside and when it rained he stood in the sentry box heehee. 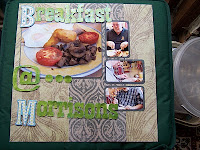 Before we did the museum we started the day properly with Breakfast, not at Tiffany's but at Morrisons! We love breakfast at Morrisons. The eggs are always perfect. We don't like the Tesco breakfast because everything is always dried out and over cooked. I had the meat free breakfast, while Mr M and the other Colin and Ann had the all day breakfast with extra toast. 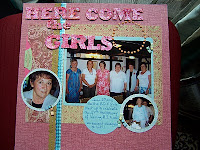 The "girls" are me and my five fellow students who were Rural Domestic Economy Students at the Monmouthshire Institute of Agriculture, way back in the dark ages (the 1960s) We meet very rarely but one of our number emigrated to New Zealand several years ago and was back home for a holiday. It was great to be the youngest in a gathering instead of the oldest. We talked and talked for hours. My daughter, who took me to the meet up, was agreeably surprised that we were not a bunch of old farmers talking about fields and the weather. Every one of the girls except me married someone in farming - four of them married fellow students - and as there were several other students from other courses in our year at the "reunion" it was good to see that some people never change. The people I was friendly with at college are still just the same, older, plumper, with more wrinkles but still the twinkle in the eyes and the ability to laugh out loud.

Photographing a day out

I made sure I had fully charged batteries in the camera and extras in the going-out-for-the-day-bag, you know the one that has the insect repellent and the umbrella AND the sunhat in the big section and a small Kendall Mint cake bar a packet of pain killers, the sewing kit, a pencil and tiny notebook and the spare set of front door keys in the smaller section. Yes that's the one. We were going out with the other Colin and Ann. A special trip to visit The Hall at Abbey Cwm Hir. We began the day by going to Morrison's in Brecon for Breakfast, yum. Then we stopped at the South Wales Borderer's Museum just so I could look at the Victoria Crosses won by the 24th of foot at Rorke's Drift. Fabulous.
Then we went to Abbey Cwm Hir which is a few miles north of Llandrindod Wells. What a place! Privately owned, you must book yourself in for either the morning or afternoon tour of ALL 52 rooms in the house. It is quirky and odd and not to my taste but it is certainly very interesting and some of the rooms will take your breath away.
I took loads of pictures of things that I thought were interesting. I tried to only use natural light and for the most part I was successful but there were one or two places where the rooms were simply too dark and I had to use the flash. I now have loads of choices to make - a double page layout or a separate special album? choose just one or two pictures to sum up the day or tell the whole story with all the pics (more than 60)? I just don't know yet. There are a couple of good pics of the other Colin and Ann that deserve a separate page. 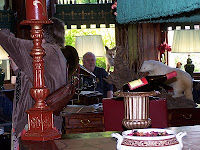 There is one pic of Mr M that I think is just lovely and I want to scrap that one in the 2010 12x12 album. So many pictures so little time. 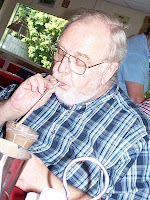 We were feeling a little peckish by the time we left, a long time since breakfast, so we headed for Leominster. Old friends will know that this can mean only one place for us to go and eat - The OK Diner. I had the beer battered Cod with fries. Mr M had the 10oz All The Way Burger Colin hadanother of the burgers and Ann had the Ribs and Wings. We also had a 12 inch stack of onion rings. Nom,nomnomnomnomnom. 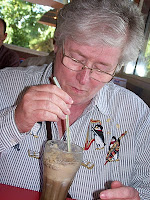 I didn't have time to photograph the meals because as soon as the food arrivedc we all piled in and started chomping. A fabulous day! All I need to do now is rest quietly until my ribs stop aching from laughing so much

OK so I don't blog for months and then I do it twice in one day. Get used to it, I say. have been quite productive with pages recently considering how I feel so after completing the page using the picture I PSE'd 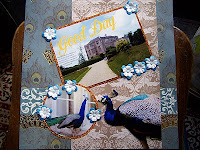 I thought I would take the photographs and get up to date. We went to Newark Park. We were going somewhere else and saw the signs for it. I checked in the National Trust book and it was open. As this is so unusual for us to find a place open when we are near it we stopped for a look. It is a little gem. The house is lived in, really lived in. Proper tenants who restored the property and stopped it falling down. When the visitors are gone they live in the rooms that we walked through. It feels loved and homey and a sheer delight to visit.
The peacocks were a bonus. One stupid woman was feeding them and when the peacock tried to climb onto her lap to get the sandwich she was eating she leapt up and shrieked. 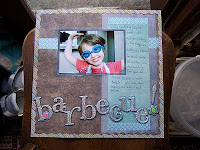 The Barbecue page shows what the fashionable five year old puts on to help daddy cook dinner. No one told her to do it she just didn't like the smoke. What you can't see is that she is also wearing an apron and wellies and the oven mitts are on the table. 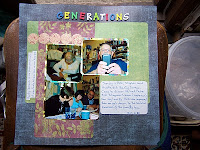 These pictures were taken by our five year old. They are of my aunt and my cousins who live in Arizona. Cousin Bob is taking pictures with his phone while Em takes pictures of him 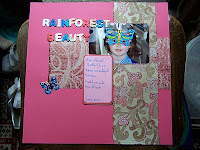 School did a project on the rainforest and what lives there. They all had to dress up as a rainforest creature so Em insisted on being a butterfly. Her daddy made the mask and off she went. The mask got ripped by her best friend so the teacher found a ladybird costume.
I did this page on a Tuesday when my cousin Michelle comes to scrap with me. We have a book of pagemaps and each week we choose the one we will do next week and then we have a week to get the papers chosen and the pictures printed. Loads of them oare way outside my comfort zone. I have come to see that I am a minimalist scrapbooker. I like the journalling best so I am content to stick the picture on the page and then write about it. Using the pagemaps has made me embellish and tear paper and even - as on this page - ink the torn edges! Michelle is the absolute opposite to me and loves filling her pages with embellishments and colourful stuff. We are good for each other because I will try things that she does and she has begun to journal with her handwriting rather than using the computer as she agrees it is more personal.
So together we enjoy a couple of hours laughing and scrapping and those pages soon mount up.

I am a bit late getting to grips with the Love your Pictures, Love your Pages class from Shimelle because real life is still getting in the way of what I want to do.

I managed, today, to read all the propts from the first week and the one that really took my interest was putting titles onto pictures. I vaguely remember doing this some time ago but I couldn't remember how. I had to print the pages from the prompt because flicking back and forth between windows was driving me insane - and I just couldn't remember what the prompt had said even though I was looking at it just seconds before. I don't seem to be able to retain information from the screen I need it in my hand or propped up in front of me as I work. 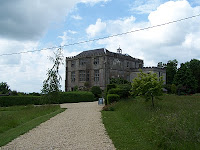 Anyhooo, I chose a picture with a lot of 'white space' only it had a power cable across the middle of the picture so I had to work out how to erase the cable. I managed to do that quite effectively so I then followed the instructions given by Shimelle and soon I had a title and some writing on my picture. 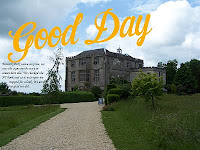 I have to say that I am just the slightest bit smug about this. OK so I know it's not rocket science but still, I do feel as though I have really achieved something and that has made my day. I think I will treat myself to a raisin and oat cookie, I deserve one because not only have I achieved something but my lovely next door neighbours are moving today and I will really miss them.
Posted by Ladkyis at 05:24 2 comments: