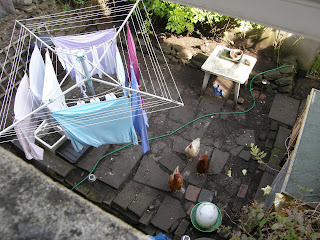 1. a clothesline
I have been waiting to capture this picture for a while. It is my clothes line as seen from my kitchen window. As you can see I have a tiny back garden - a real back yard - and I have three chickens so there is nothing green in my garden below chicken head height. Their house is on the right of the picture. They are so used to us opening the kitchen window and throwing them a treat that when the window opens they rush from wherever they are to where you can see them and they gaze expectantly up at us. I rewarded them with a few pieces of cocktail sausage each.
This was one of the few days this year that I have been able to put clothes onto the line and it was so nice to smell the fresh air when I was folding the clothes to put them away. I don't know how people manage without a clothesline. I suppose they must have tumble dryers or they put the clothes on radiators in the winter just like me. This year I have found myself using the clothes airer that we bought 20 years ago, I only brought it out occasionally until this year when it has only been put away because we had visitors and needed the bedroom.
Now I only have four more and just a month to do it. Doesn't time fly?
Posted by Ladkyis at 06:47 3 comments:

We decided that we would take Eldest son and family on the Welsh Highland Railway as a treat. Having a Kia Sedona meant that we could get all of us - four adults two children - into one vehicle so we packed up the mountain of stuff needed for a three-year-old and a two-year-old and set off from Rhos on Sea to Caernarvon.
I love engines, Steam engines and some of the early oil-fired ones so this was going to be a really good day with my grandsons. As we got to the railway depot the sun disappeared and it was really quite chilly.
The two year old is teething - those dratted canine teeth - so he had the familiar bright red patches on his cheeks and his fingers were continually in his mouth. He fretted. We discovered that we had missed the first train and had a wait of nearly an hour and a half so we took a walk up into the town. we found a cafe with outdoor seating and had a cuppa where those teeth gradually became more painful. we walked along the streets and looked at a really good fountain

A FOUNTAIN? that's on the list! I took some pictures while the little one fretted. Then it started to rain. By this time both the boys were heartily fed up with just wandering about. We were all cold and now we were getting wet and we still had over half an hour before the train was due to leave.

If you want to see other pictures from other people who are joining in the Scavenger Hunt just go to Rinda's blog  and take a look
Posted by Ladkyis at 01:01 14 comments:

We went up to north Wales last Friday, just for a few days with my eldest son, his lovely wife and my two newest grandsons. They are age 3 and nearly two and are just delightful. Hearing two little voices calling "Grandpa, Grandpa" throughout the day was just lovely. I digress. 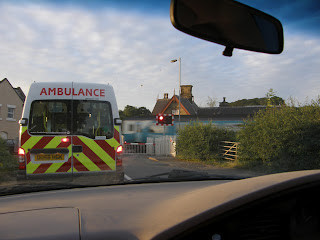 On the way up - we go up the A49 because we can stop in the OK Diner for a meal on the way - we go through Onibury where the main rail line crosses the road. We were behind an ambulance, not any old ambulance but one you can hire. It was driven by a....... no that's another story. We came to the level crossing and the lights were flashing so the ambulance stopped, we stopped and the three cars behind us stopped. There is always a short time of nothing happening at level crossings and suddenly Mr M said "Have you got the camera ready? We need a train." I switched on and pressed the necessary buttons and pointed the camera at the little bit of crossing gates that we could see from our position behind the ambulance. We had the engine turned off and the windows open so we could hear the rails singing as the train came nearer. With a great whoosh of noise it was speeding past the gates. I managed to press the button as the front of the train reached the gates.