I have already blogged that I was ill, well yesterday Mr M took me out for a little ride to make me feel better. It took a while. For some reason what ever made me ill took away the internal sensor that stops a person feeling car-sick. The light was too bright, the air coming through the window was just full of perfumes and strange smells and quite honestly it was almost overwhelming what with the swoop and glide of the car too. It got better and we went to a lovely place called Talgarth. We have been through it many, many times and alwaysliked the look of it. When the by pass was done it was much easier to go straight past but a couple of years ago there was a TV programme about the old water mill there and how the people had acquired funding and a project manager to restore the mill and make it a tourist place. It is delightful and if you are ever in that area you must go look at Bronlleys Castle and climb the staircase and then go to the town centre and go into the mill.


If you are very lucky you will have Gordon as your volunteer. He knows about mills. He helped restore Gelligroes about five years ago and he has done the volunteer guide thing there too.

We had a cuppa in the cafe there simply to add a little to their coffers. The service was lousy the coffee was good but as the staff are all volunteers it is just something we are supposed to accept. Just as well I don't live there or they would be feeling the benefit of my years of expertise.

We then went to Brecon and had a late lunch in Morrison's. We had fish and chips and I managed to eat all the fish so that stopped Mr M worrying. When we set off again it was as though I had found the off switch and the queasyness was completely gone. We will go there again with the Bluefunnels. Not much walking and a very interesting man to talk to.

On the way home we saw the outside staircase so we added that to the tally for the scavenger hunt.

We braved the rain...

It wasn't as bad as predicted where we went yesterday. We try go go out once a month with Mr and Mrs Bluefunnel. We all agree that a day out together is the best tonic we can have. They work so darned hard during the week and have so many calls on their time that it is important to get away once in a while, although Mr B can slip into sales mode as easy as taking a breath.

We had decided to go to the Brockhampton Estate, a National Trust property just outside Bromyard in Herefordshire. It was the B's turn to drive so they picked us up around 8.30 and we headed for Monmouth and places north. We were going to have breakfast at Jo's place. It used to be a little chef many moons ago and then it always looked closed even though it might not have been. Then we noticed that there was a new sign so we stopped to have a cuppa one day and liked how clean it was so we had a breakfast. We are now confirmed customers and we highly recommend it to everyone. We took Pete there when we were going to Coventry for the Weeding last November and he agreed with us. The Bluefunnels love it too and they stop there if ever they are heading up the A40. From there we went to The Hop Pocket near Ledbury. Actually it is Bishop's Frome. We didn't realise until we got there that we had been before. Mrs B likes to shop but not your designer shopping she likes handmade quirky craft stuff and she shops all year to find that special present for people for Christmas. She loves Christmas.
WE noticed the notice outside the Butcher shop at the Hop Pocket. we didn't go in and tell them we just took pictures

The SatNav decided that the place we really wanted to be was Brockhampton Care home so it took us ten miles out of our way and this meant ten extra miles of Mr Blue complaining and telling the lady inside the SatNav to shut up because she didn't know what she was talking about.

One of the first things we saw at Brockhampton wass the sign for the nature trail. The rain was holding off although we had driven through several flooded lanes on our travels. This was fine because Mr and Mrs B have done the Landrover experience with Landrover so driving their Discovery through a flooded bit of lane was a doddle. Because of the saturated nature of the nature trail......... who am I kidding, we don't do walking, Mr M's knees don't allow it and Mr and Mrs Blue both have knees awaiting surgery.

Lower Brockhampton House is a delight. because the owners built themselves a newer, more fashionable house further up the hill in the 1700s the old house was used as a farm house and wasn't modernised or messed with at all so it still retains a lot of the original timber and stuff from when it was built around 1430 something. It has the remains of a moat, a gatehouse that was built in Tudor times lots of red brick outbuildings that were built during Stuart times and later and even though it is small it is well worth a visit.

We then came home because Mrs Blue remembered that she had to get things for dinner that night and I could feel The Cold beginning to take hold. Mr M has suffered with it all week now it seems to have caught me.
I managed one quick snap of the River Wye at Monmouth as we sped along. It is still below the top of the banks but it won't take much more rain in the next day or two to push it up. Fortunately we seem to be having mostly sun today. So that's a relief
Posted by Ladkyis at 02:32 No comments: 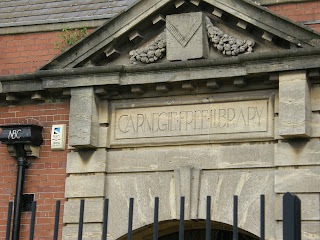 This scavenger hunt has made me think. We went out for a little drive around today, pausing at the Carnegie Library on Corporation Road so that I could take a picture. Mr M suggested that I could write about Andrew Carnegie and why he endowed these libraries when I make the album of the scavenger hunt. I think this is s a Good Idea. 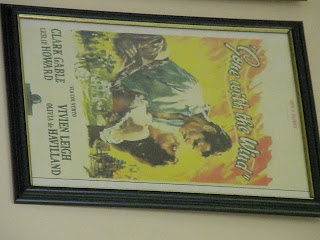 We went the pretty way out to Chepstow and discussed what we would do for the "tour" when a friend brings a friend to visit and then because the stupid driver in front of us turned onto the racecourse road we didn't go up the Wye Valley through Tintern as I thought we might but we carried on down the hill and past Chepstow and onto the Gloucester road.


This is where I got to thinking. Mr M slowed down and said "An outside staircase!" I looked and said "Nah, those are steps". He gave me a funny look and carried on driving while I was examining my statement and I realised that I had a picture in my head of most of the things on the list and as long as the image presented in front of me was close to the image in my head I was alright with it. If the image presented did not ..... conform to what I saw in my mind it was "wrong".


We had quite a discussion about it and decided that as I am the one with the camera I get the final choice. Mind you, as Mr M is far more observant than me he will be presenting lots of good images to me during the next several weeks. 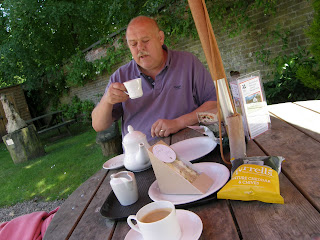 By this time we had reached the Silver Fox Cafe at Broad Oak so we just had to stop for a cuppa. On the wall was a framed print of a movie poster! so I took a picture of that.  I can highly recommend their fish and chips and they do a fantastic roast dinner on a Sunday. We had eaten a cheesey bacon baguette as our breakfast so we were full up and could only manage a cuppa.


We then carried on around Gloucester and off towards Tewkesbury before being deflected by yet another Sunday driver who took the road Mr M had planned on so we went a different way and headed towards Bromyard. "Get the map off the back seat and get me to Brockhampton Estate," he said while sitting behind a spackweasel in a Citroen. I did both. We stopped in the New Old Apple Store Tearoom and had a cuppa and a sandwich - and a special treat of a packet of crisps. We are going to Brockhampton with the Bluefunnels next week so we didn't go to the house this time. Then we headed home via Hereford and Abergavenny. I just love our little trips out. Mr M loves to drive and it is just us we can talk to our hearts content about everything and anything and while we are both tired when we get home we can also talk about what we have seen and done. I suppose that one day we might run out of things to talk about, but not for a while yet.
Posted by Ladkyis at 11:30 1 comment: