More for the Scavenger Hunt 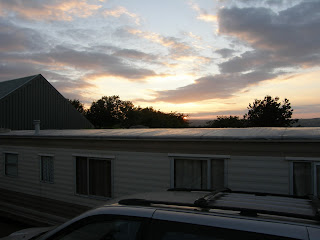 5. A Sunset. Took this from the doorway of our caravan. not a particularly inflamed sunset but I like it. 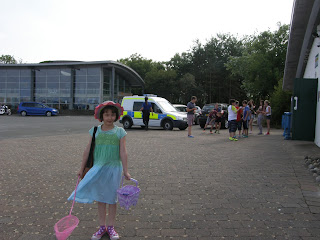 "Stand there! No, over to your right a bit. I want to get a picture of the tall policewoman and her van. Miss Em is delighted with the recent purchase of her fishing net and we were just off to try it in the sea 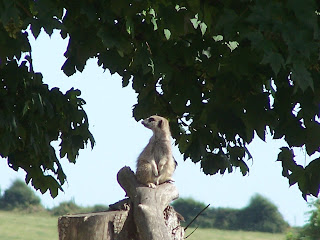 We went to Manor House Wildlife Park, just outside Tenby - or as we say in Welsh Dinbych-y-Pisgod. The Meerkats were all sprawled out in the sun except one who was up on the tree stump on duty. They changed places every so often and took it in turns to be on guard duty.

A quick check of my list tells me that I seem to have only four left to find..... I wonder which one I will fail on this year.

Someone or something taking a nap - PSH 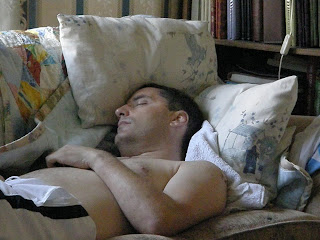 This is my baby boy - well my youngest son. He had keyhole surgery on his shoulder last Tuesday and seems to think that because he is home and can walk about that he should not still have pain and should be able to "be back to normal". I have explained that after invasive surgery your body has to recover from the trauma and that ten years ago he would have been kept in hospital for a week, but what do I know? I am just him Mum.
He thinks that sleeping all the time is wrong. I sigh to myself and explain that your body can only do so much and to give it chance to recover it is ok to sleep, because then your body doesn't have to waste energy keeping you awake and doing things it can concentrate on healing -But what do I know? I am just Mum.
He says he keeps getting hot all the time, I explain it is the weather and having 30 degree temperatures means that everyone is feeling hot just as he does - But what do I know? I am just Mum.
I say "do you have pain?" he says yes.
I say "have you taken the pain killers?" he says no.
I roll my eyes and explain that they gave him the pain killer for a reason and I wonder if he knows what that reason is. He looks at me like I am speaking in tongues. "They are to stop the pain so you can sleep" I say, and we immediately go back to "Sleeping is wrong"
Then he finishes his drink of water, taking two pain killers because I gave them to him and stood over him in a threatening (but motherly) manner, and within 20 minutes was sound asleep again.
You would imagine that someone over 40 who has served in the army in Bosnia and in Northern Ireland would be able to cope but because he is living with us again it's just like he has regressed into a teenager. It's a good job I love him - but that's cos I'm just Mum
Posted by Ladkyis at 08:38 5 comments: 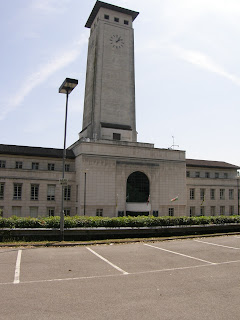 This is our Civic Centre. That's its real title. It was built in the 1930s as you can see by the style - you can't actually see the entrance because that is below the level of the car park boundary. Mr M did stop for me to take this. Wasn't that kind? the Tower was not added until the 1960s and there were those who thought it ruined the building. I think it just shows that the council at that time had too much time on their hands as they were desperately trying to get our town recognised as a city - and that didn't happen until 2002.

We had hoped to take its picture from the other side but since they built the new Court building they have totally spoilt it AND when we drove past I realised that the trees in the car park on that side totally blocked the view of the building and all we could see was the tower sticking out of the tree tops.

I like that our Murals are done by an artist that also did murals for Port Meirion.

Today we nipped the 21 miles up to Ebbw Vale to deposit the account books and papers that I found in my Dad's box and cupboard. We spent a happy hour talking to Frances Younson one of the Archivists about the stuff and then filled in the forms and moved on to Costco.

I love Costco because they always have things I desperately need. Today I just had to have a box of Chocolate and oat Nature Valley bars. My youngest son, for reasons that I won't go into, is now living with us again and he as discovered that there is a lot of satisfaction in a couple of those bars when he is driving his HUGE truck across the country every night.

I nearly had a picture of some fishermen but as usual by the time the camera was switched on and I had pointed it out the window we were three miles past them.

On the way home we came the pretty way along the levels - this is the coastal flat land that is only dry because of the sea wall - and I was ready. I knew the windmill was there, I had the speed judged to the millimetre and I got this 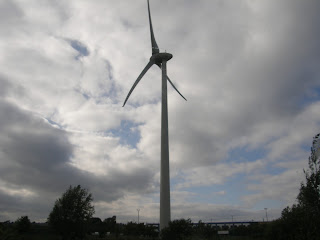 I could say that the cloud behind them looks like two people kissing...... but I think I'll just go with the windmill. I am quite pleased with this one because I managed to avoid photographing the bird poop that was on the window by sheer good luck. I didn't notice it until after I had taken the picture and I was sure that it would be perfectly in focus and right in the middle of the picture - Phew!!!
Posted by Ladkyis at 12:14 6 comments: