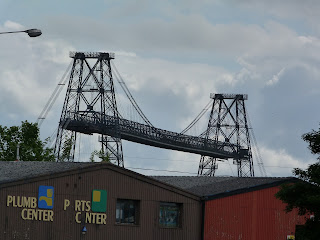 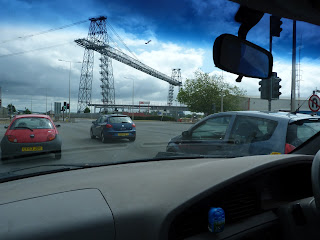 These are alternatives for number 6. A Metal bridge. This is our Tranny. The Transporter Bridge. There are only eight in the whole world and three of them are in the UK Ours here in Newport and another in Middlesboro that works differently but dominates the skyline just like ours and one in Warrington that is not working..
Here's the history lesson
It was commissioned to enable the workers from the Lysaghts ironworks to get across the river from where they lived to where they worked without having to travel two miles along the west bank of the Usk to get to the town bridge and then two miles down the east side to get to the works.
Because the River Usk, along with  the Bristol Channel has the second highest tidal rise and fall in the world the road base had to be very high above the river so that ships coming to the docks could get through on a high tide ( they needed the high tide to get into the docks). The banks are low at this point so a traditional bridge would have been too steep for traffic to use.
Ferdinand Arnodin designed our bridge with a platform that hung from the bogie on the top of the bridge and the bogie was propelled across the girders by cables and a motor and the traffic could park in the platform and be "transported" across.
Now a personal story
In the late 1970s - before I met him - Mr M was working at Lysaghts (now called Orb Electrical Steels, where he still works) and he had been out with a friend and was going home to change before making a night of it "on the town" he drove onto the gondola as the platform is called and it started across the river. The gondola stopped halfway across the river because the cable that turns the thingy that makes the bogie go across the girders broke. after sitting there for four hours they were eventually winched back to the side they had started from and they had to go the long way around. He has never been on it since.
Posted by Ladkyis at 15:22 12 comments: