We spent the day with the Bluefunnels, See here how they got their name We gave them a Treasure Trail for Christmas, take a look at the website and they said we could all do it together. We kinda hoped they would say this because it looked really good. It was a Spy Mission type trail - it explains in detail on the website - and was a mostly driving trail in a figure of eight around the Forest of Dean. I managed to get two pictures for the Scavenger hunt at the same time!so here for your delection are
Number 13. A Fence 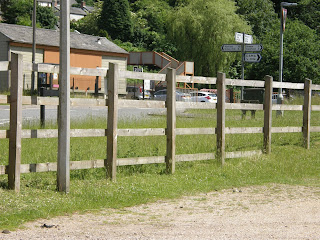 By the time we stopped here my legs were two inches shorter than when we started but I was brave and trudged along behind Mr and Mrs B to collect the clues. This is Parkend, by the way. Nearly at the end of the trail and we were all showing our unfitness. Mr B had a knee replacement in March so  he did amazingly well. Mrs B is staving off the moment when she has to have a knee replacement. Mr M hasn't even seen the GP about his painful knees yet and I am just over weight. 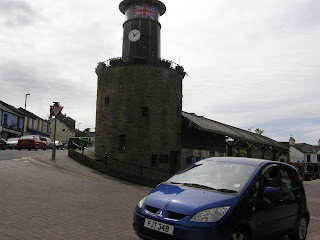 The tower looks like a lighthouse. It is in Cinderford and commemorates something but my mind has gone a complete blank so I will need to look it up on Google before I do the page for the album.

Wwe both love being "up in the Forest" and we only mean the Forest of Dean when we say that. I could happily live in any of the towns there and probably a lot of the villages too.

We stopped in Coleford to find clues for the trail and had lunch in Kaplan's cafe restaurant. We can highly recommend it. Mr M and Mrs B had the Roast Dinner and Mrs B said the carrots  were cooked to perfection. Mr B had the steak and kidney pudding and chips and declared that he was in heaven. I had plaice and chips which was also perfectly cooked and the fish was really moist and delicious.
All in all a fabulous dday for completing a Treasure Trail and getting two more pictures for the PSH
Posted by Ladkyis at 12:04 9 comments:

I keep going back and doing a little bit until I just can't stop being emotional and then I shut up the cupboard and leave it for a while. I spoke to the nice man from Gwent Archives recently at the FHS Open Day and asked if they would be interested in the books and stuff that I have from my Dad's company. He said that simply from a social history point of view they were always interested in day books and accounts and anything that gave insight into the small businesses that were in the area. All the stuff remains the property of the family but it will be stored in the archive and be available for research so Into The Bag my Pretties, you are going to Ebbw Vale! 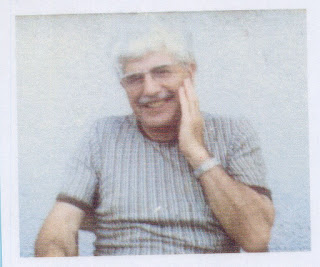 While I was sorting through the cupboard I opened an old envelope and discovered it was full of small envelopes and in those were lots of old postage stamps. Some with Hitler on some from germany before WW1 some Canadian ones with Queen Victoria and loads from the Netherlands. Now what I need is a stamp expert :(
Posted by Ladkyis at 12:39 6 comments:

Scavenger Hunt 2. A Theatre for the performing Arts

We went to the dentist yesterday. Well what else would you do on your wedding anniversary?.......... beg pardon?...............Really? you go out to a real restaurant for a slap up meal? Gosh. We'll have to try for that next year.
When your anniversary falls in the middle of the week and it just happens to be one of the days when Mr M is working an afternoon shift (2pm to 10pm) it kind of mucks up any dreams a person might have about some quality time together.
Mr M had a dentist appointment at 10 am and as the dentist is 30 miles away I decided to go with him. That way we could chat in the car and while he was being poked with sharp instruments I could nip up the road and take a picture of the Savoy Theatre and Cinema. 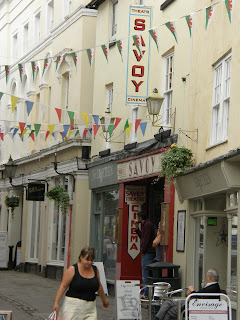 This sweet little theatre claims to be the oldest working theatre in Wales. It has its own website and really is the most delightful little building. The two guys standing in the entrance smoking did not enhance its photogenic qualities but I didn't have time to shove them out of the way.
Posted by Ladkyis at 13:25 14 comments: 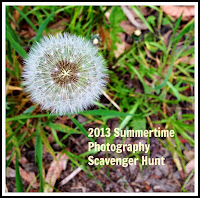 I made an excellent start to the Photographic Scavenger Hunt on the very first day. We went to Tyntesfield, a National Trust property and they were having a 1940s day so I managed to get these.


The Dinosaur we found in Morrisons. More updates soon.