My rememberer is wearing out 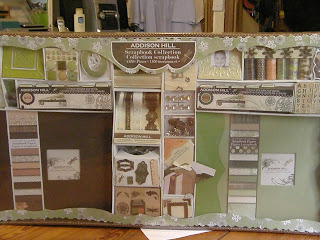 It's not that I don't do lots of pages, I do. I just have to remember that I should photograph them before putting them in an album. I have just discovered the delights of 12 x 12 three ring binders. How could I have missed these? I have always used post bound albums for my 12 x 12 pages until now and I saw what was a bargain as Costco where they had scrapbooking kits with two albums in them plus a load of ribbons and embellishments and brads and stuff all for thirty quid. I assumed that the albums were post bound and thought that this was a good price for two albums with faux leather covers. 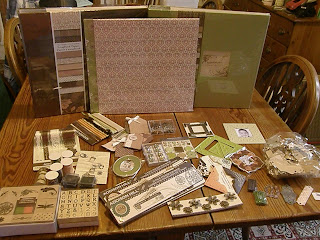 Imagine my surprise when I got them home and opened them up to find two three ring binders! and some really quite nice papers underneath them too.

I thought I would get some more of these wonderful albums so I started looking on this here intarwebby and discovered just how much of a bargain these sets were. A 12 x 12 three ring binder will cost between 20 and 30 pounds! and I got all that stuff for 30 pounds. I am using the green one for this year's album and I have already had to add to the ten page protectors that come with it. We seem to have done an awful lot this year, either that or I am remembering to photograph everything we do. Hmmm perhaps my rememberer isn't quite as bad as I imagined after all.
Posted by Ladkyis at 05:06 No comments: 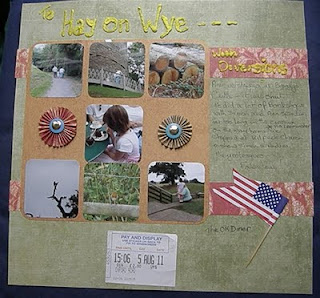 I managed another LO for Shimelle's challenge last weekend. I managed to do a grid. We -that's Mr M, AJ, S-i-L and the Divine Miss M - went to Hay-on-Wye via Bronllys Castle which is at Talgarth.  It was shut. Then we had chocolate cake in Hay, well, some of us did. The diabetic ones just drooled. We headed for Leominster and the OK Diner for our dinner. If ever you are passing that way then do try it. We love it even if we can no longer eat Eli's famous Cheesecake. On the way down from there Mr M asked those in the back if they had ever been to Kilpeck Church. They said no. so we took them to see the most wonderful medieval church EVER! While they took pictures of the grotesques around the roof Mr M was trying to persuade Miss M to go and push a big bale down the field. He was severely reprimanded and there was even a threat to ban him from the OK Diner for the next six months ( we are going up that way soon) He was a good boy from then on. We saw a woodpecker and a robin. 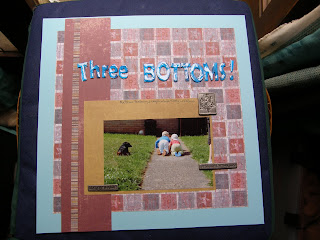 I have had great fun doing some pages for the online crop run by Shimelle so I thought I would put some of them here
The first one is two of my youngest grandsons crawling in the garden. The older one , in blue is teaching the youngest to crawl. At least that's what he says he is doing. The dog knows different. My son took the pictures and it just tickled me that there were three upturned bottoms, if you include the dog - and we always include the dog. this was done for the start here challenge. 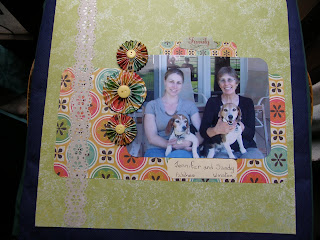 The next challenge was to scrap a page using embellishments made from paper. As I am kind of into the concertina flowers at the moment I just couldn't resist making a couple or three out of the off cut from the bright patterned paper behind the picture. I also punched out the border strip using my martha Stewart punch, I can't remember the name but it does both sides at the same time of the  border strip and I love it. I am just beginning an album of all my cousins on the paternal side of my family. This could take a while because we are still discovering new ones and the numbers are up around the nineties now. This does include first cousins once removed too. this is for the chop the page challenge 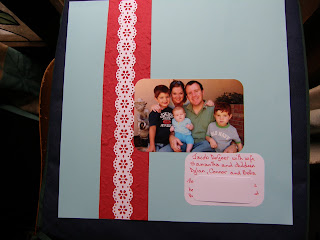 this one is again for the cousins album and we were challenged to use Red, white and aqua. Not a combination I had thought of but very effective, although the aqua looks decidedly blue in this picture and for some reason the red strip has made all the faces look red in the picture - interesting.
That's all for now
Posted by Ladkyis at 08:23 2 comments:

We seem to have a knack, Mr M and I. We choose a place to visit and when we get there it is shut! I have spent a marvellous couple of hours going through the albums and the Holiday Journal to make a list of the best places that have been shut when we visited I have pictures of some of them 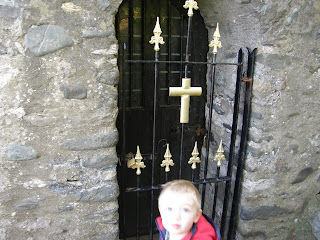 1. The Chapel on the promenade at Colwyn Bay. We had gone up to North Wales for the baptism of my Grandson, Joseph. While Mummy sorted out his new clothes and got him ready for his big day, Daddy and big brother Matthew took Grandma and Sooty the dog for a walk to see the little Chapel. As you can see from the blurry image young Matthew is not pleased about it being shut. He wanted to show Marmar inside!

2. The view from Snowdon
We caught the earlybird ride on a brilliantly sunny day and travelled up on the little ratchet driven train. the closer we got to the top the further into the cloud we travelled. When we arrived at the cafe - yes there is a cafe on the top of Snowdon, courtesy of the victorians, we were far enough into the cloud that we couldn't see the barriers on the edge of the station platform. The view was shut! We had a dreadful cuppa and caught the next train down. There is very little you can do on top of a mountain when your knees are past their sell-by date.
3. Jodrell Bank, Radio Telescope base.
Mr M had long wanted to go there and as we had chosen to meander around Cheshire, Shropshire and mid Wales for our holiday - this was in about 1990 - We woke up one morning, packed up the tent and followed the map to the gate to discover it didn't open until 10.30am. we looked at the clock in the car it was 9am. I think it was around this time we began to discover that most supermarket cafes did a good breakfast. 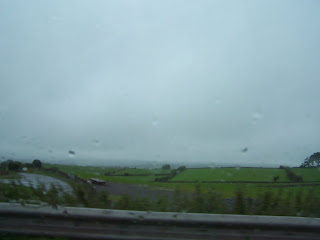 4. The view across Morcambe Bay
We spent a happy week in the Lake District in 2010 where the sun shone every day except the last. On that day it poured with rain so we decided to go to Grange-over-Sands because we liked the sound of the name. Nromally you have quite a good view out over Morcambe Bay but on that day we had yet another view that was shut.

5. The Merchants House, Tenby, Pembrokeshire
We love Tenby, it has to be our favourite town even though it has become the hen-party mecca of South Wales. The narrow streets and tall houses the quaint harbour where I lost my spade when I was two years old. The Tudor Merchants house down near the quay. We must have been to Tenby twenty times before we managed to co-ordinate our visit with a day when it was open and we finally saw the inside.
6. Bannockburn, Scotland
Now this is a field with a statue of Robert the Bruce, so you'd think it would be open all the time right? Wrong. The gate was closed and chained and there were two padlocks on it. We have never been back so we don't know what it said on the statue, or why it was so important to barricade the field. 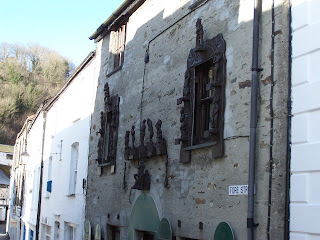 7. The Cornish Piskie shop, Polperro
OK so we went to Polperro in February, but that's when we had a week in Cornwall and the trip to Polperro was Mr M's birthday treat. The pasty shop was open, the chocolate shop was open. Even the sweetie shop that also sold sweets for diabetics was open but we couldn't get a Cornish Piskie. Perhaps they were on their holidays too

8. Land's End
The carpark was open and they were still charging £3 to park. The restaurant was open for tea and coffee and expensive food. The shops were shut as were all the "attractions". They advertise that they are open but they are not. Disappointed. 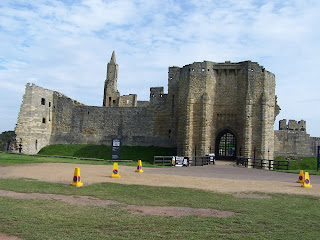 9. Warkworth Castle
Very firmly shut. OK so it was 9am and they opened at 11am but when we got there they were shut. We went for breakfast in the supermarket.

10. The Vatican Library, online
I have saved this until last because it shows how skilled we are at visiting shut places. There was a piece on the news, not long after we were first connected to this here intarwebby and it said that the Vatican was putting some of its vast and unique library onto the internet. Mr M noted down the URL because we had been connected for oooh, about three months or so by then, and we decided that we would visit that night (still on dial-up so had to be after 6pm for cheap rate) He carefully typed in the URL and we waited - I went and made a cuppa and came back just in time to see the screen fill with a notice that said
"The Vatican Library is closed for refurbishment, please come back again"
We consider this to be our crowning achievement - so far

This entry has been brought to you because of Shimelle's Beyond Blogging for Scrapbookers
Posted by Ladkyis at 07:41 4 comments: