Out for the count

I was woken at 3am on Saturday by a really raw sore throat. So raw and painful it gave me a headache!
I had two paracetamol in the draw of the bedside table so I took those with the last of my water and hoped for sleep. I must have slept a while and then woke again with an even worse throat so I staggered down stairs for more water and ibuprofen. no strength to climb the stairs so I curled up in my chair with the bettermaker blanket. Mr M was so good. The first thing he did when he got up was make me a drink and bring me more painkillers. He did that for two days! as the sore throat faded and the runny nose and sneezing took over. After that had held the stage for 24 hours the coughing really began.
All this conspired to make me totally forget about True Stories. I haven't read a prompt yet, but I will. I feel a lot better as long as I don't actually do anything. I had to see to my girls today, Mr M will feed and w 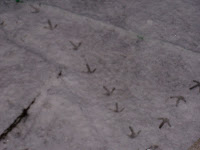 ater and check the nest boxes. He will even put more shredded paper in if it looks a bit dirty or thin but he just cannot do the cleaning out bit. I had to get in there and give it what my granny called a good bottoming. Now the girls have clean bedding in the nest boxes and clean paper under the perches. As it is quite cold at night now I will be putting some straw in around the nest boxes because they both seem to prefer to sleep in the nests rather than to perch - probably because they are ex-battery hens.
Anyway, the reason I haven't done any True Stories yet is because I have been attacked by a virus but now I am getting better.
Watch this space
Posted by Ladkyis at 17:53 No comments:

The demo was fine, the car park was hard 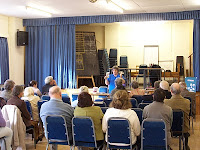 The demo was good. Even if I do say so myself. There were 30 people there and only two had seen me talk about scrapbooking before. They knew what I would be doing so they sat at the back.
Several others had that go-on-entertain-me expression on their faces. Well, you would wouldn't you if you have gone to the AGM of the family history society you expect a speaker who talks about parish registers or census indexes or stuff like that. You don't expect the person who you have just re-elected to the chairman's job to spread out a pile of paper and card and strange looking gadgets and start talking about your precious old photographs of your ancestors. 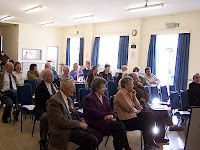 It took me two minutes (I kept one eye on the clock) and I had the first genuine laugh. After that they were leaning forward to see more clearly what I was doing. I had prepared two pages, one with two pictures of my Dad for the album I am making about him and a more modern one of me with some special friends.
I did the page for Dad first, I explained the reason I was doing the album and why it is still incomplete even though Dad died in 2003. Then I showed them the pictures and explained my reason for choosing them. I talked about storage of old photographs and gave them a few things to think about regarding old photographs. I hope I also gave them the tools to take ownership of their photographs.
I told them what I was going to do, then told them what I was doing, and then held up the result and showed them what I had done - that's teaching that is.
I then suggested that they might have questions and the first one was "can you do another page?" so I brought out the bag with the other page saying, "here's one I prepared earlier" and did the other one. Then we had to stop because the time was running out and we had to be out of the hall. I think that I might be asked to speak at some of the society branches - so I am really pleased that it went well.
This kind of gives me confidence to organise a crop in the hall across the road. I wouldn't want to "teach" but I know I can stand up in front of a room of people and demonstrate how to achieve a simple page. I am sure that once the first crop has happened we would be able to organise more.
The reason I say in the title that the car park was hard is because as we were leaving the hall I caught my shoe on a tiny kerb around a little fowler bed and spread my not inconsiderable bulk across the tarmac. I was carrying a plastic box with all my alphas in separate containers under my arm, quite a large box. and that hit the ground first forcing my arm and shoulder to go into shapes they were never designed to attain. The result was pain. head-swimming, eyeball twisting gutwrenching pain. It didn't last long and there was no serious damage to my physical health. My ego however took a terrible beating. Can you imagine the embarrasment of falling over in front of so many people?
I'm just glad the camera was in the other box and Mr M didn't think to get it out and use it.

I resisted for ....ooh at least 24 hours, and then I just could not think of any real reason why I wouldn't desperately want to be a part of the new class "True Stories" over at Shimelle.com

I love to write and I love to see how other people set about writing so I am bound to learn something.
Today I am chairing the AGM of Gwent Family History Society. It looks as though I will be elected to serve for a third year, and I have to say that I really quite like it. The other thing I am doing today is talking and demonstrating "Heritage Scrapbooking".
I dislike this use of the word heritage but understand that the English language is always changing because it is a living language and all that guff. I don't have to like it though, do I?
I thought the purpose of language was that words had meanings so that when they were spoken other people could understand what you were saying because of the words you use. So why have we suddenly started to use a word that means one thing in a place where the exact opposite meaning is intended. The simplest example is using the word 'bad' to mean 'good'.
This is when I know I am getting old... ~sigh~
Anyway, I am demonstrating how to make a scrapbook page using photgraphs of ancestors. I will be putting forth my thoughts about copying old photographs, conserving old photographs and using the original photographs in scrap albums about family history. Stressing all the time that these are personal views to be listened to, thought about and ignored if they so choose.
I will photograph the pages and perhaps get Mr M to take pictures of me doing the demo and try and get the pics on here as soon as I can.
Perhaps this will encourage me to organise a crop in the hall across the road - I have been thinking about it for a while now.
Posted by Ladkyis at 03:35 No comments: