We have a favourite picnic place that we often go to. We don't take sandwiches, oh no that's not the sort of picnic we like. We go out to a place called Black Rock, which is on the Welsh side of the Severn Estuary not far from the Second Severn Crossing.
The Lave Net Fishermen work that part of the estuary and there are only 15 people licensed to fish in this way. One more traditional craft that is dying before our eyes.. That's not why we go there either. What we do is this. 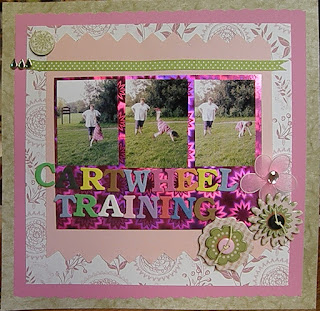 We decide that we cannot be bothered to cook so we text my daughter and see if she wants to come to Black Rock, and stop at Kibby's in Bulwark for fish and chips. They make the best fish and chips in the area and most times my daughter will say yes so we all pile into the car and drive twenty miles to buy fish and chips and then go down to Black Rock to sit at the picnic table and eat them. We are not alone in doing this, although I don't think most people travel twenty mile just to eat fish and chips staring at the tide.
The picnic area is grassy and great for learning to cartwheel when you are seven - even when you have never done it before. Mummy tried and decided that she is the wrong shape now. Grandma? well, I just grinned and then gave clear instruction while trying not to laugh or fall over when taking the pictures.

I used the sketch based on a design by Tiff Firth from the Scrap365 challenge to do this page and even if I say so myself I think it is quite nice
Posted by Ladkyis at 07:15 5 comments:

What do I need to make a page?

Sian asked this question over at From High in the Sky and I tried to answer in a comment but failed so I decided to think about it and write my thoughts here.
I have been scrapbooking for so long I can't remember not doing it. When I had the riding school, way back in 1961 when I was 15, I took photographs of all the ponies and put them in an album with some notes about names and riders and what the event was and the date. Of course it wasn't called scrapbooking then. It was just a photograph album. It had black pages and I had a white pencil to write what we call journalling.
It was a very cheap album, from Woolworths I think and it received a lot of attention over the years so that eventually the covers fell to bits and then the pages started to detach from one another so I had to take all the pictures out and then make a new album. I haven't photographed the pages because it seems to have lost a little of its character in the transfer.
I like my pages simple. I am not a great one for embellishments and usually just matt and layer the pictures unless a sketch catches my attention. Then I will try to follow it, although my slavish adherence to the sketch sometimes makes the page seem flat and uninteresting.
The first page here was created because of the title. Mr Blue said exactly that so I took the picture and made the page because of it. 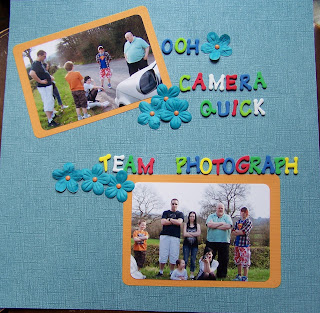 The next page was the Journalling. I saw that somewhere and remembered that I had the perfect picture of Mr M, taken when he had driven up to Northumberland and then he had a little nap. When he woke up he was still tired and needed a cup of tea. I asked how he felt and he pulled that face so I snapped it. The journalling fitted exactly and nothing else was needed.
The third one happened when I was downloading the pictures from the camera and these two were one after the other. We have a thing about "team" photographs. Whenever the family is asked to "Stand still and let me take your picture" they always say loudly "Team Photograph!" and fold their arms across their chests like footballers. It was Mr M who started it and it always makes everyone laugh so then I can get good pictures of them individually. This time we were driving home from somewhere and saw my son and his family walking along the road near where they live. We stopped to talk and I took the first picture, then I walked around the car to try and get my daughter-in-law in the picture and that's when my son said "Team Photograph" and explained what they had to do.
Reading back over this it seems that what I need for inspiration is a title; that the words come first and I can find a picture to fit. That would explain why sometimes I put together a page for a day out and I don't have a title for it.
I seem to prefer the 12 x 12 format for my pages. I tend to go for plain backgrounds for the most part, I like words on my pages most of the time. I sometimes have a lot of journalling, especially for holiday pages, but other times the title is enough. The words usually spring to my mind when I see the picture although sometimes I know I have a picture when I hear a phrase.
But what do I need to make a page? OK, paper, pen, glue, picture and inspiration -that's it!

I am so excited! The postman knocked the door this morning and handed me a parcel from Amazon. My mind went into overdrive because I hadn't ordered anything for ages! Mr M watched as I dropped the mail onto the table and rushed to the kettle - it was just beginning to boil - and made him a cup of tea. He could tell by my face that I didn't know what was in the package.
I gave him his mug of tea and made myself a milky coffee - usually on a Tuesday we seem to have a fridge full of milk where there is some left over from the weekend and the Milkman delivered another two days worth in the early hours of the morning.
I sat down and turned the package over in my hands. "Open it," said Mr M, "You know what it is."
"Well, " I replied, "no I don't, I haven't ordered anything, so it must be a mistake." He gave me one of those looks, you know, the one where a small part of his brain thinks you are joking while the big part of his brain is amazed that you can forget such an important thing
"What about your Scavenger Hunt prize?" He asked.
A stunned silence as I stare at him and then at the package............. Of course!
and this is what I received 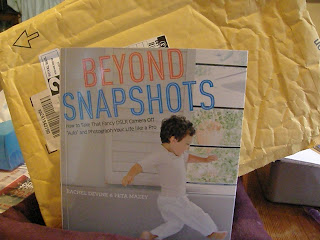 I started reading it straight away but then realised that I have Things To Do, so I shut it carefully, took a photograph of it and now I am telling you about it. Mr M is off to work at 1pm (I hate afternoon shifts) so I can take the time to read and play for a while until I collect Miss Em from school - and then I will have a willing model. It seems to be written in real language, the sort that ordinary people use and not high-falutin' photographic techie stuff so it might even sink in.
Many, many thanks to Rinda for sending this wonderful gift. I am so thrilled by it and I will read it and play I promise.
Posted by Ladkyis at 03:18 4 comments: